The ISDB-T Broadcasting Technology Seminar was held in Colombo, Sri Lanka on Thursday December 1st, 2016 at the Ramada Colombo Hotel, organized by the Ministry of Internal Affairs and Communications of Japan (MIC). Approximately 70 people participated in the Seminar.

The Democratic Socialist Republic of Sri Lanka announced the adoption of ISDB-T in 2014, and Sri Lanka Rupavahini Corporation (SLRC) is now continuing its trial broadcasting as the national TV broadcaster. In order to contribute to the smooth implementation of ISDB-T in Sri Lanka, the ISDB-T Broadcasting Technology Seminar was set up by MIC toward the people in the government and the broadcasting industry, and ARIB/DiBEG dispatched its experts to support the event.

The seminar started with the welcome speech by Mr. H. Ogawa, Director for Digital Broadcasting Technology of MIC, followed by Dr. M. Sugawara, Chairman of DiBEG, explaining the outline of ISDB-T and the activities of DiBEG. 6 experts from DiBEG member companies each made presentation on transmission, reception, studio equipment, datacasting and EWBS (Emergency Warning Broadcast System), together with the explanation of the latest status of migration to digital TV in Sri Lanka by the JICA survey team. Mr. H. Ogawa of MIC introduced the experiences in the digital TV implementation in Japan and Brazil; and Mr. K. Murayama of NHK followed with the explanation of the latest R&D status on the next generation digital terrestrial television. 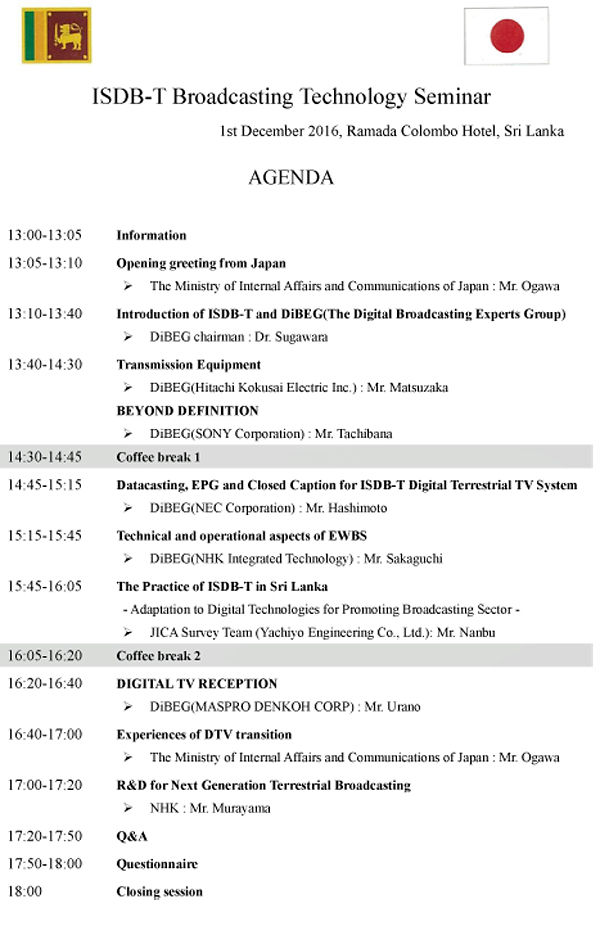 At the Q&A session there was a question about any difficulties in the ASO (Analog Switch-Off) in Japan; and the MIC representative responded that the public awareness and PR activities to replace the receivers were major challenges they met during the transition. Also there was a question as to the relationship between the current digital terrestrial TV and the 4K/8K broadcasting. The answer was that the 4K/8K trial broadcasting is going on in Japan via satellite as one of the new broadcast services; and the possibility of terrestrial 4K/8K broadcast is to be studied with the results of the on-going R&D activities.

At the seminar hall, actual reception of the trial ISDB-T broadcast signal by a flat panel display, exhibit of the set-top box with multiple language application, miniature ISDB-T tuner for smart phones, and the EWBS receiving module were introduced to the Seminar participants. 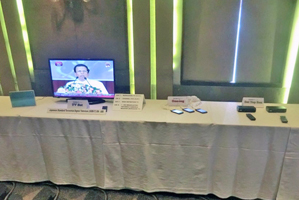 Demonstration of the reception of trial ISDB-T broadcasting by SLRC 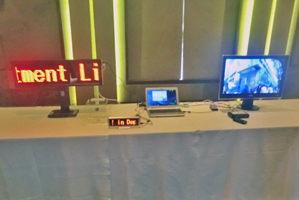