Chile decided the adoption of ISDB-T in September, 2009 as its national standard of digital terrestrial television; and now it is scheduled to attain the ASO (Analog Switch-Off) in March, 2020. In order to promote the terrestrial digitization process, a terrestrial digital TV seminar was held in Santiago on January 17th, attended by approximately 100 people.

Ms. Catalina Parot, President of Consejo Nacional de Televisión (CNTV), Ms. Pamela Gidi Masías,  Subsecretaría de Telecomunicaciones (SUBTEL) and other government executives of Chile, together with broadcasters and related industry people attended the Seminar. The Japanese delegation was headed by Mr. T. Kunishige, Parliamentary Vice-Minister for Internal Affairs and Communications, followed by the executives from International Cooperation Division and Broadcasting Technology Division of both MIC, ARIB/DiBEG member company representatives (from NHK and Hitachi Kokusai Linear) and from the secretariat.

At the opening of the Seminar, Ms. Parot of CNTV, Ms. Gidi of SUBTEL, Mr. Ernesto Corona Bozzo, President of Asociación Nacional de Televisión (ANATEL), and Mr. Kunishige each made a welcome speech.

Following the opening remarks, Mr. A. Castro of SUBTEL explained the role of SUBTEL toward the promotion and implementation of digital terrestrial TV; Ms. T. Lama of CNTV presented the role of CNTV and its current status on the digitization process; Mr. M. Sepúlveda of ANATEL explained the latest situation of Chilean broadcasters’ efforts and challenges toward the ASO deadline of the year 2020.

Mr. C. Núñez of ANATEL explained in his presentation that digital TV services are beneficial not only via terrestrial transmission but also via satellites. Mr. E. Corona, President of ANATEL, stressed the necessity of realistic measures toward the completion of TV digitization now scheduled in 2020.

Mr. H. Kimura, Director for Digital Broadcasting Technology Division, representing MIC, introduced the experiences in the digital transition and the latest study status on the next-generation broadcasting technology in Japan.

Then the representatives from ARIB/DiBEG member companies presented the benefits and various applications of digital terrestrial TV in comparison with analog TV services (by Mr. Y. Maruyama of DiBEG), experiences in the transition from terrestrial analog to digital TV and the latest situation in the development of next-generation digital broadcasting technology (by Mr. K. Suzuki of NHK), digital terrestrial TV transmitters and the next-generation ISDB-T technology (by Mr. Y. Miyoshi of Hitachi Kokusai Linear), outline of international activities of DiBEG (by DiBEG secretariat); international promotion of EWBS (Emergency Warning Broadcast System) technology (by Mr. Y. Sakaguchi of JTEC), and international promotion of Japanese program contents (by Mr. S. Maeda of BEAJ).

The Seminar was concluded by Dr. M. Sugawara, Chairman of DiBEG, with his closing remarks.

There was an exhibition area next to the Seminar hall, where we introduced the DiBEG promotional activities, together with a demonstration of EWBS, and an introduction of international marketing of program contents. 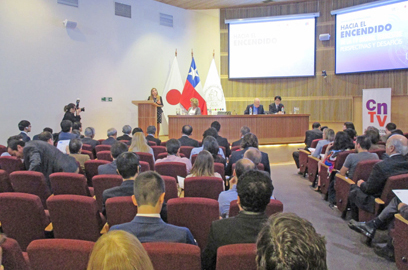 Overview of the Seminar Hall

The Technical Harmonization Meeting was held in Sao Paulo on August 21 at the Expo Center Norte among the members of ISD...
2017.08.21

The 1st Joint Working Group Meeting on ISDB-T in Nicaragua was held at the conference room of Instituto Nicaragüense de ...
2015.11.12

The Plurinational State of Bolivia decided to adopt ISDB-T as its national terrestrial TV standard in July, 2010, and st...
2019.05.14