The “EWBS Dissemination System” has been supplied to some of those ISDB-T adopting countries in Latin America on an experimental basis. The current status of technical cooperation from Japan and the actual implementation in these countries are as follows;

Reports with some topics on the latest implementation status in Costa Rica, Nicaragua, El Salvador and Peru are as follows;

In Central American countries, conducting technical cooperation together with the Swiss international cooperation project “EWARNICA”, delivering Earthquake prevention alert system through EWBS has been developed and being tested. 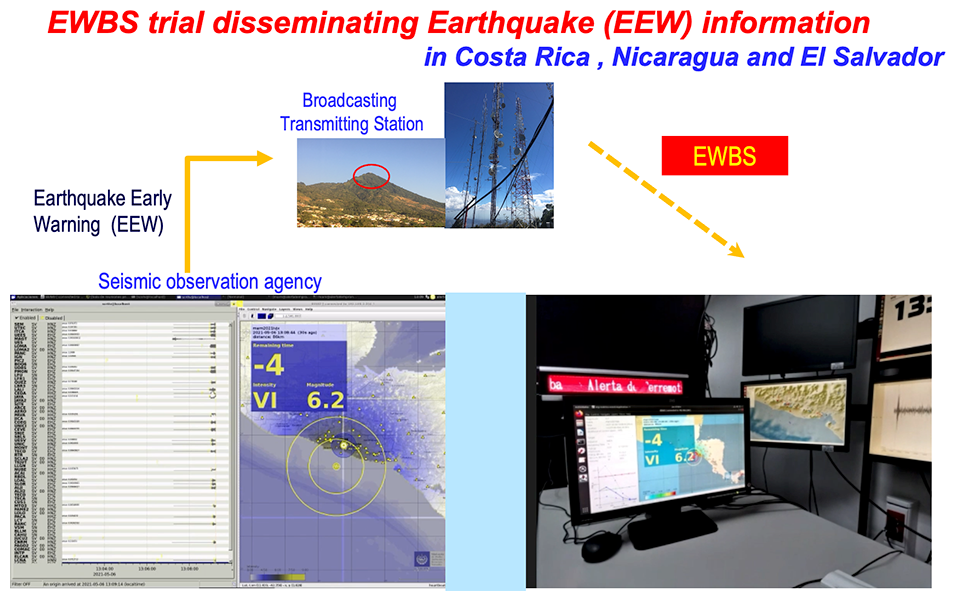 In March 2019, we performed a reception evaluation test using actual radio waves in Costa Rica. We made measurements in weak field strength reception areas and mobile reception. Costa Rica is a mountainous country. But even in shadow areas where Full-seg cannot be received due to topographic conditions, One-seg signal could easily be received with a simple receiving antenna. As for the mobile reception, we conducted receiving tests on traveling trains, vehicles and on boats with a signage receiver.
As a result, we could prove and show very stable receiving characteristics, which the local people highly appreciated. We could make sure that One-seg is the key element of info-communications in the event of a disaster.
In Costa Rica the feasibility of the EWBS has been confirmed, and the government is studying the establishment of a new organization and securing enough budget for the full-scale EWBS operation. 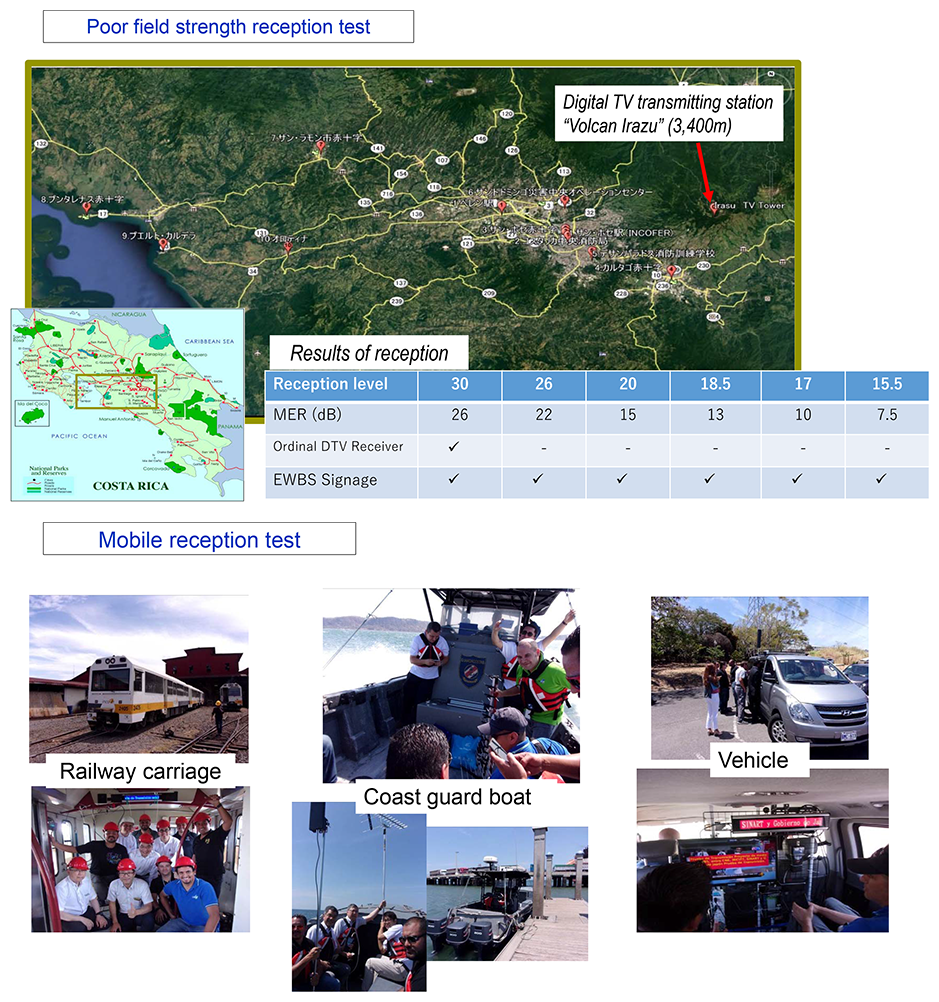 Peru is the country where the operation of EWBS is most advanced. Peru has a large land area and a variety of natural disasters such as wide-area tsunamis on the coast, heavy rain and landslides in the Andes areas, flooding of the Amazon River, and cold-weather damage in the high mountain areas. It is thus necessary to design and implement EWBS operations in due consideration of these various disasters. Then it is important for the EWBS to establish operational rules and standardization, such as nationwide/local operations and region code allocations. As the digital terrestrial network expands nationwide in the future, the EWBS operation will also have to develop and expand nationwide.
We have improved the software of EWBS operations in order to meet these Peruvian future requirements, and the system has achieved a high level of operational performances. We expect that the permeation of receivers will naturally expand as the operational level of EWBS advances.
On November 5, 2019 commemorating the “World Tsunami Awareness Day”, extensive evacuation drills were conducted in Peru, and EWBS played an important role for the drill. A message transmitted via EWBS was displayed on a large screen outside the shopping center at the main venue. An EWBS signage was used in a disaster ministerial meeting.
At the symposium the following day, INDECI, the national organization for disaster prevention, announced a budget plan for the adoption and nationwide deployment of EWBS in Peru. 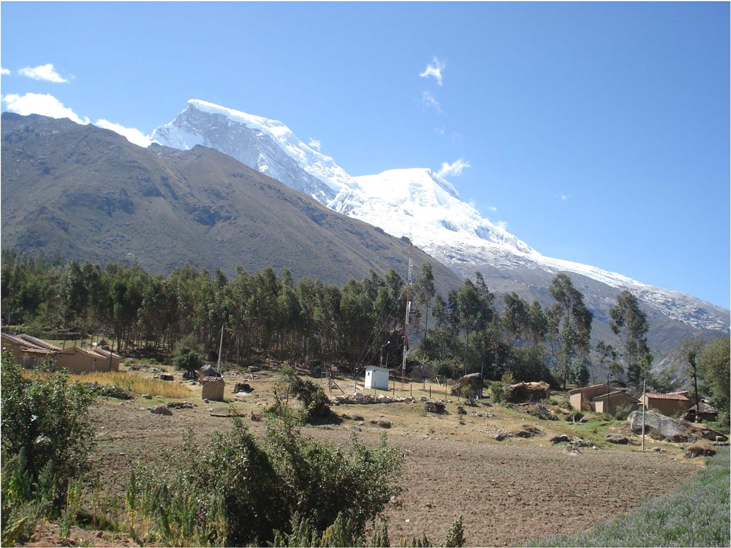 AT A TV TRANSMITTING STATION IN PERUVIAN ANDES. THIS IS A DISTRICT WHERE 20,000 PEOPLE DIED OF DROWNING BY DEVASTATING GLACIERS FLOODING CAUSED BY THE 1970 EARTHQUAKE. IN THE FUTURE, DIGITIZATION AND EWBS OPERATION WILL CONTRIBUTE TO THE LOCAL SPECIFIC DISASTER PREVENTION. 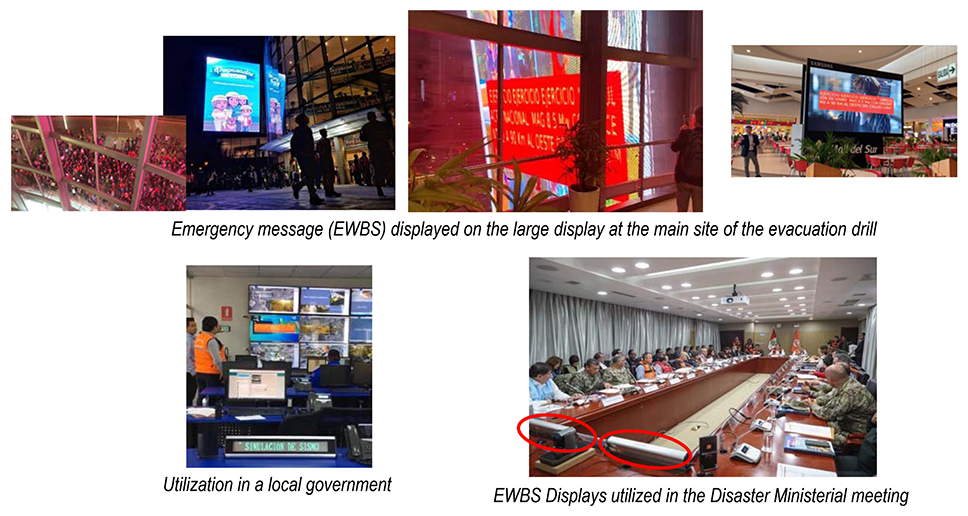