On November 24th the 5th Japan–Botswana Joint Working Group Meeting was held in Gaborone, Botswana. The meeting took place at the headquarters of the Department of Broadcasting Services (DBS), where the representatives from DBS, Ministry of Transport and Communications (MTC) and Botswana Communications Regulatory Authority (BOCRA) welcomed the Japanese delegation from the Embassy of Japan in Botswana, Ministry of Internal Affairs and Communications (MIC), Japan International Cooperation Agency (JICA), ARIB secretariat and some of the Japanese companies.

Botswana announced the adoption of ISDB-T in February, 2013, which was the first announcement in the African region. In order to study various challenges to the ISDB-T implementation in Botswana, both countries take turns at holding the Joint Working Group meeting annually. DiBEG under ARIB has also been joining the meetings to support the implementation from the technical and engineering viewpoints.

At the meeting this time, based on the subjects of interests by the Botswana side, the Japanese delegation offered information on the ASO (Analog Switch-Off) process, on the subsidy policies on STB (Set-top Box) distribution to low income families, etc. And some of the Japanese companies showed and demonstrated prototype ISDB-T receiver products such as an STB, a tuner for smartphones and tuners for mobile reception, by actually receiving the Botswana TV program on the air. During this meeting it was made clear that the Japanese government would continue its support for the Botswana implementation planning for ASO, while the Japanese companies present there announced their intention to undertake manufacturing of STB products in case Botswana government decides to take up a subsidy policy on STB distribution for low income families. 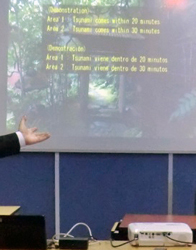 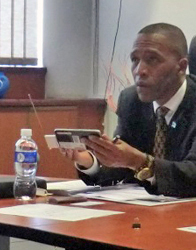 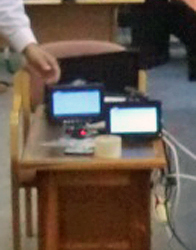 The Botswana side explained that the national broadcaster has already started digital terrestrial TV broadcasting, that they would soon grant digital TV broadcasting licenses to private broadcasters after studying the licensing conditions, that many of the Botswana households are enjoying satellite TV broadcasting services, that they are tackling to enrich local program content to increase the number of households watching digital terrestrial TV, that there are limited number of digital TV receiver manufacturers due to the relatively small size of its population, and that they would expect support from Japan on the distribution of STB products.

The next meeting is expected to be held some time in February, 2017 in Japan; and bilateral representatives would communicate with each other for the details.

On April 28 and 29 there was the captioned seminar held in Quito, Ecuador hosted by the Ministry of Internal Affairs and...
2014.04.28