The 1st Joint Working Group Meeting on ISDB-T in Nicaragua was held at the conference room of Instituto Nicaragüense de Telecomunicaciones y Correos (TELCOR) in Managua, Nicaragua on November 12, 2015.  Nicaragua decided to adopt the Japanese digital terrestrial TV broadcasting system (ISDB-T) in August, 2015, and the 1st Joint Working Group Meeting between the two governments was held at this occasion to solidify the bilateral collaboration for the smooth implementation of ISDB-T in Nicaragua. 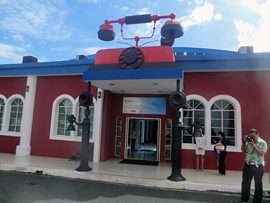 At the meeting, TELCOR explained the history and current status of broadcasting services in Nicaragua, and expressed their hope that the introduction of digital terrestrial TV service would provide good momentum to Nicaragua.  Representing the Japanese side, MIC explained the outline of digital terrestrial TV services and also the current progress status of the next generation broadcasting in Japan; ARIB/DiBEG explained its international promotional activities on ISDB-T; and JICA explained the situation of support and cooperation in the ISDB-T implementation in Ecuador.

The participants in the meeting showed strong interests in the concrete implementation schedule toward the transition to digital TV, smooth permeation and sale of digital terrestrial TV receiver products, etc. 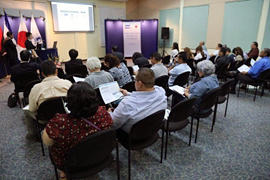 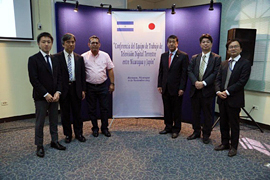 In Japan, the government, broadcasters, manufacturers, and many stakeholders have taken dedicated efforts to achieve the...
2011.07.24

Bolivian government hosted the seminar and the demonstration for the terrestrial digital TV from Wednesday, 29th July th...
2009.07.29
Digital Terrestrial TV Seminar Held in Ecuador
Participation in the InterBEE 2015