The Plurinational State of Bolivia decided to adopt ISDB-T as its national terrestrial TV standard in July, 2010, and started trial broadcasting in September, 2011.

Following their successful 1st digital terrestrial TV seminar in La Paz in January last year after their adoption of ISDB-T, the Ministerio de Obras Públicas, Servicios y Vivienda approached the Embassy of Japan in La Paz to inquire the possibility of holding similar seminars in its major cities of Santa Cruz and Cochabamba, and the Ministry of Internal Affairs and Communications of Japan (MIC) decided to join the seminars in the above two cities. ARIB/DiBEG followed MIC’s decision and dispatched its representatives as a part of their international activities of ISDB-T promotion and technical support.

Inside the Seminar Hall at UTEPSA

The Seminar was initiated by welcome speeches by Lic. A. Carvahlo, Principal of UTEPSA, Ing. R. Dorado, Director of ATT and by Mr. D. Sasaki.

Mr. W. Pantoja of the Viceministerio de Telecomunicaciones started his presentation with the features of digital terrestrial TV services; license application steps for simulcasting broadcasters and for other broadcasters who switch to digital terrestrial TV service without simulcasting; and finally explained that the renewed nationwide ASO (Analog Switch-Off) planning in 3 phases.

Mr. D. Sasaki of MIC presented the benefits of ISDB-T broadcasting, such as EWBS (Emergency Warning Broadcast System), various data-casting services, hybridcast and mobile reception capabilities, then introduced the completed process of ASO in Japan, and concluded his speech, celebrating that this year is the 120th since the first Japanese immigrants arrived in Bolivia, expecting mutual relations being further strengthened.

Then the DiBEG representatives made presentations respectively;
– The DiBEG secretariat introduced the outline of its technical support and cooperation to those ISBD-T adopting countries;
– Maspro Denkoh (Mr. K. Inukai) presented the TV receiving antenna products and knowhow about the TV signal reception;
– JTEC (Mr. Y. Sakaguchi) explained the EWBS, especially on the Superimpose of emergency warning information onto the Ones-seg broadcasting.

Mr. Y. Miyoshi, on behalf of the Brazilian SBTVD Forum, presented the outline of the Ginga middleware to the latest version of the Profile D. 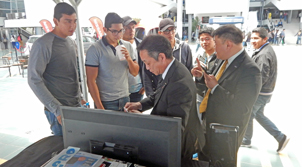 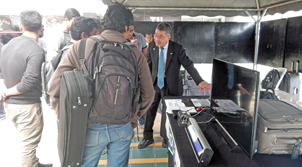 The second Seminar was held on May 15 in Cochabamba, at the hall of Universidad Mayor de San Simon (UMSS), where 204 people attended.

Inside the Seminar Hall at UMSS

With the same delegation from Japan as on the previous day, the Seminar was initiated by welcome speeches by Lic. J. Rios del Prado, Principal of UMSS, Ing. Gustavo Pozo, Vice Minister of Telecommunications, and by Mr. D. Sasaki, followed by the presentations by the same lecturers as on the previous day in Santa Cruz.

As in the UTEPSA campus, UMSS offered an open space for exhibition, where DiBEG, Maspro Denkoh, JTEC and Hitachi Kokusai set up display booths respectively and attracted seminar participants with their displays and demonstrations.

ATT also set up its exhibition booth to introduce their activities, attracting visitors interested in the telecom and broadcasting areas. 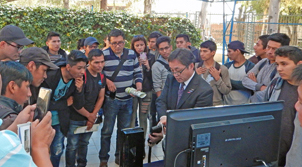 Demonstration at the Exhibit Area 1 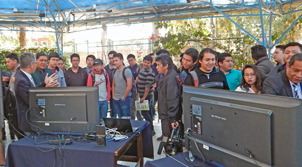 Demonstration at the Exhibit Area 2