In Latin America, while the EWBS is expected to be an option for the “Early Warning System”, the EWBS as a broadcasting radio wave is positioned as communication infrastructure for disseminating information for national disaster prevention, and is expected to play a core role.
In collaboration with several manufacturers in Japan and Argentina, we have developed an “EWBS Dissemination System” which is optimized for local requirements in Latin America. This is a system that transmits information related to disaster prevention, using the character “Superimpose”, which is a text information transmission mechanism of ISDB-T, and displays it on various types of receivers.
A message signal can be easily inserted into an existing terrestrial digital network, and wide coverage and robust transmission characteristics can be realized easily and at low cost by using One-segment signals. Thanks to this feature, there is an advantage that this can be easily introduced in Latin American countries where disaster prevention information transmission systems have not been developed well yet. Furthermore, by developing transmission and reception as a package, identification transmission for each receiver type or alarm type is realized by utilizing the control code. We have also designed several device tests and training modes to accommodate various operational patterns. 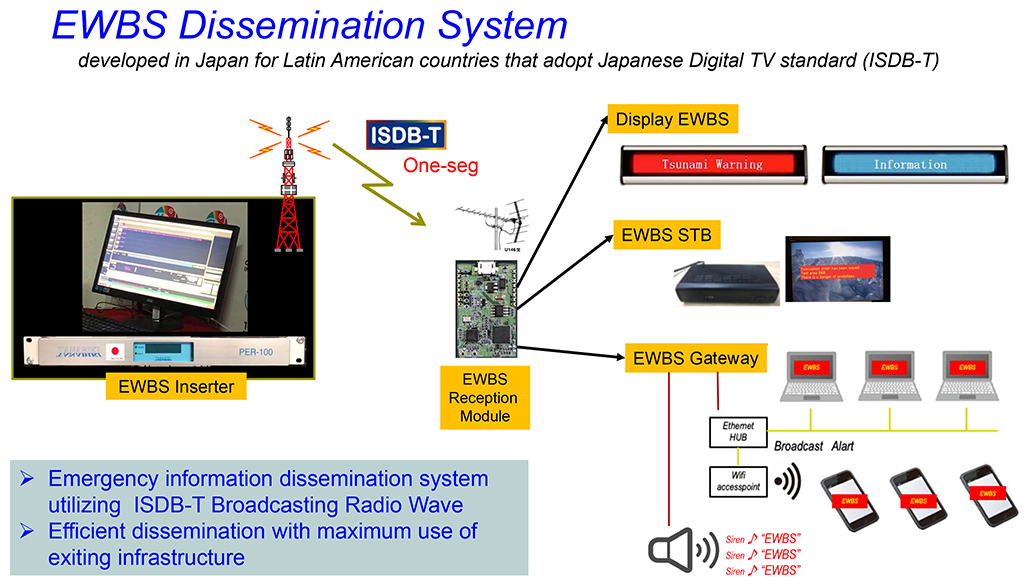 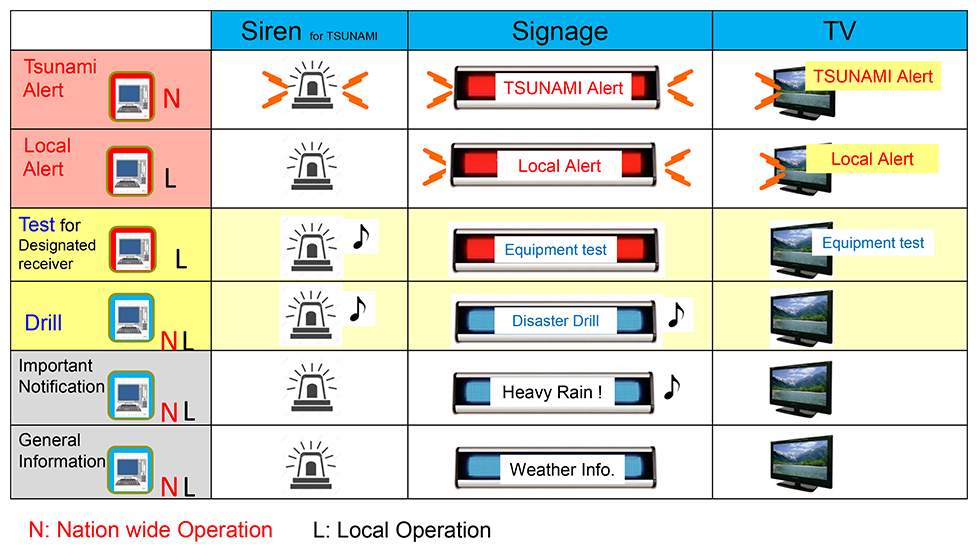 The “EWBS Signal Inserter” enables to insert an EWBS signal such as emergency flag, character Superimpose, Are-code, etc. at operator’s discretion to the “Broadcast Transport Stream (BTS)” defined by ISDB-T, replacing and multiplexing it for broadcasting. By inserting the EWBS signal at the BTS stage, it is possible to implement EWBS operation without particular difficulties in the Latin American ISDB-T adopting countries where various manufacturers have supplied various ISDB-T broadcasting systems.The “EWBS Signal Inserter” can be installed at the master control room at a TV center; and it also can be installed at a local transmitting station to insert local specific information to the TV program. The control terminal (PC) to be installed at a National organization for disaster prevention can be easily connected to the “EWBS Signal Inserter” via IP network. Peru has increased the reliability and security of the entire system by establishing IP connections of VPN configuration via a microwave link.

Figure shows an example of operation in Peru. It ensures that national and local information can be transmitted in a flexible manner according to its specific purposes and target areas. With the cooperation of a local manufacturer in Argentina we have also developed an EWBS signal transmission system by DVB distribution format which is widely used in Latin America. 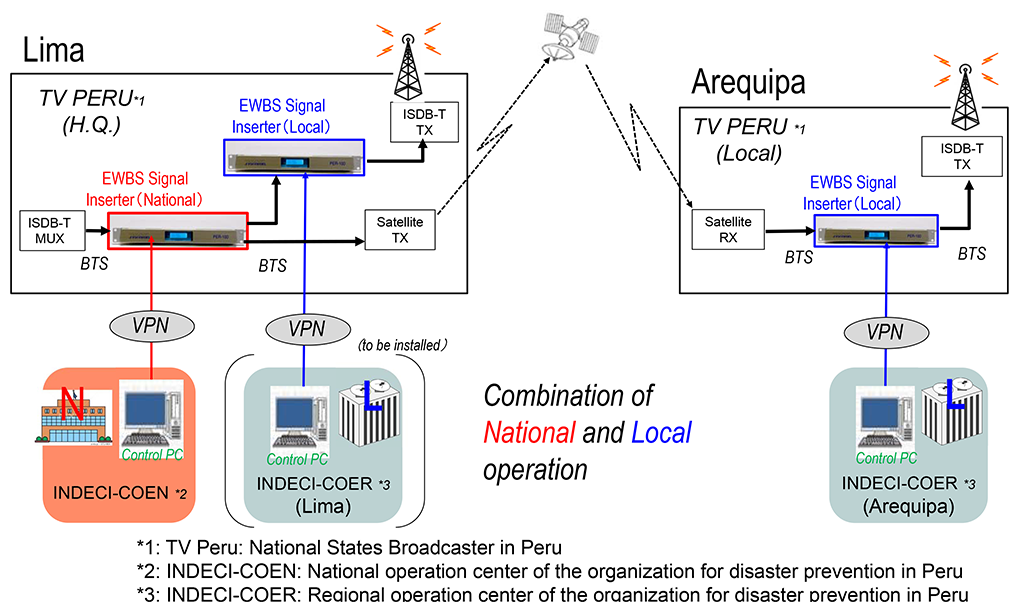 EXAMPLE OF EWBS OPERATION IN PERU

For the promotion of the sale and permeation of EWBS receivers in the consumer market, we have developed a basic module named “EWBS reception module” that can be deployed in various receivers.
This module constantly monitors the terrestrial digital “One-Seg” signal of a specific broadcasting station carrying the EWBS signal, and once it detects an EWBS signal, it decodes the signal and makes output of an emergency flag and a text message. In Latin America, information terminals such as electronic bulletin boards and speakers can be seen around the city. By mounting this module on these exiting terminals, it enables an application as alarm indication devices. 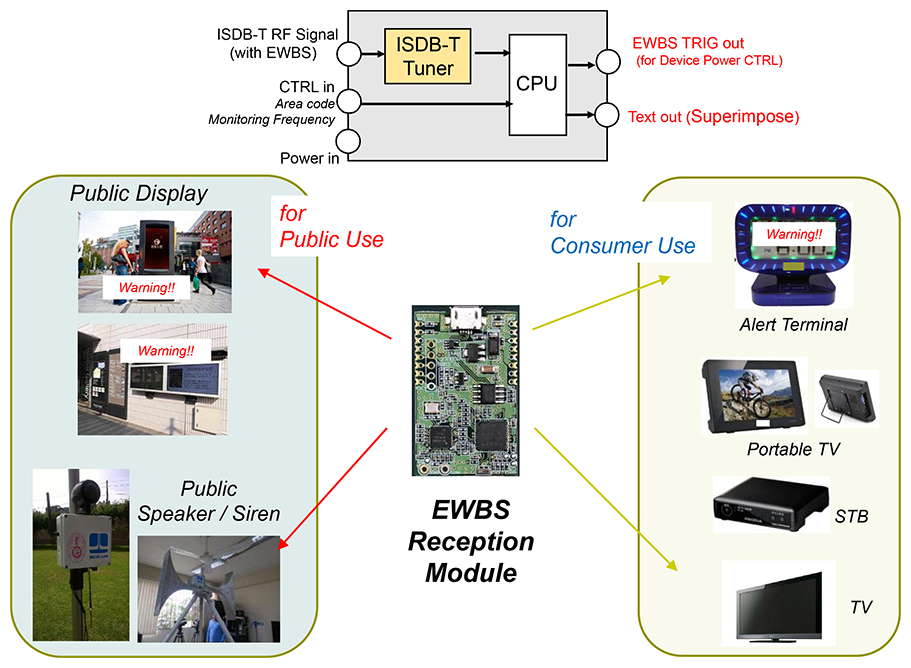 Next, we have developed a character display terminal (EWBS signage) equipped with an EWBS reception module. It is assumed to be installed in public facilities where people gather, such as government offices, fire stations and any other disaster prevention places, as well as shopping centers.
As a notable installation location, Peru has installed terminals at radio stations in local cities and regions.
Installed at a radio booth, when a warning is received, the radio anchorperson reads the message to the listeners as it is displayed.
What is expected of the application of signage is the dissemination of information right after the disaster. As an example of application the display can be installed in an evacuation center, providing daily lifeline information to the evacuees such as lifeline restoration status, volunteer activities, etc.

EWBS SIGNAGE IN OPERATION AT A RADIO STATION IN LIMA, PERU

Since an ordinary STB has only one tuner, it receives EWBS while watching a broadcast channel that operates the EWBS, but it misses an alarm while watching other broadcast channels. The STB that we have developed can receive EWBS without missing the EWBS message by implementing a dedicated tuner that monitors EWBS 24 hours separately. In addition, by using the HDMI-CEC function, it automatically starts up the TV and it has a function to switch viewing to the HDMI port.
The HDMI-CEC function: The CEC (Consumer Electronics Control) is a link function that operates between electronic products such as a TV receiver and an HDD recorder, etc. each other by exchanging control signals between them via an HDMI cable. This STB utilizes the one-touch display function, which is a “common command” function that automatically turns on the TV that was switched off and switches the input to the EWBS channel automatically.
There are many households in Latin American countries viewing cable TV programs, and in such households the inability to receive EWBS signals (by way of digital terrestrial broadcasting) has been an issue. This STB can switch the HDMI port to show EWBS information even while the TV viewer is watching a cable TV program. This feature awakened and attracted the attention to this STB product. 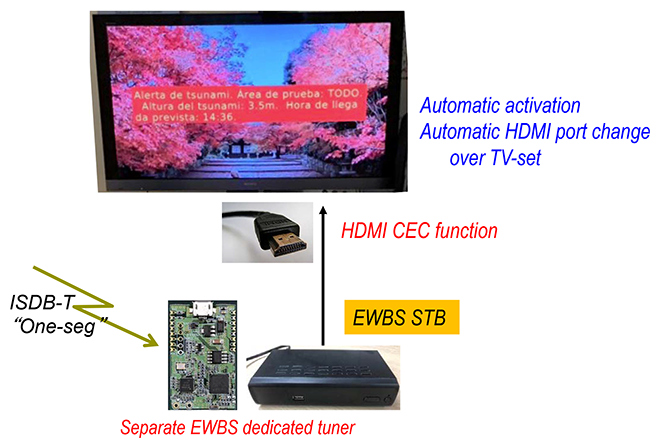 The last item of EWBS receiver to be introduced here is the “EWBS gateway”. The initial demand for this item was from the Peruvian national organization for disaster prevention which requested for the development of a mechanism to notify the alarm to PCs connected to the intranet of the organization.
The idea of applying this to a Wi-Fi router immediately came to the development. As a result, EWBS signal transmission to mobile devices such as smartphones, once considered difficult to receive directly because of the problem of battery consumption due to standby power consumption, has been realized.
The EWBS gateway also has the function of synthesizing the received text information and outputting it to a voice display terminal such as a speaker. The configuration consists of the headend in the intranet receiving the EWBS signal, pushing the message on the internet when an alarm is received.

In order to notify the EWBS to general end-users, it is necessary to have an EWBS receiver purchased.
However, once an EWBS gateway is installed at the headend of an existing communication system such as a Wi-Fi router or a community reception system such as in-house audio system in the hall, the EWBS can be received by using the receiving terminal (smartphones, speakers, etc.) in the communication system as it is. This concept of “range expansion of warning notice through the existing facility” has gained high reputation in the field and is strongly expected as the performance is gradually known to the people. 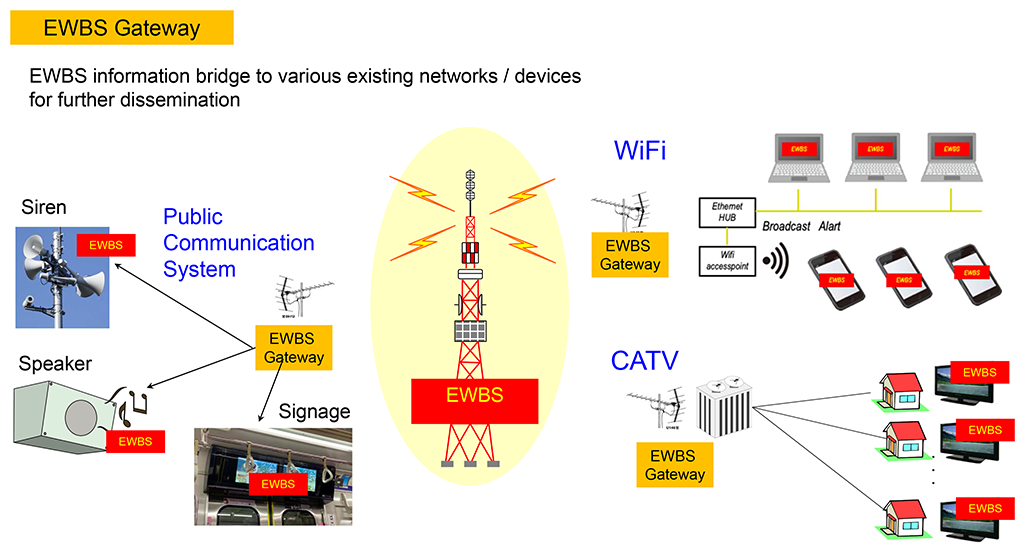