Costa Rica decided to adopt ISDB-T in May 2010, the first country in Central America, and started its trial transmission in May 2014. Since November 2016 when Costa Rica received Mr. H. Horikawa as JICA Expert in digital television, he has been strenuously working for the ISDB-T implementation.

This time the Forum was organized by SINART, MICITT and TV Morfosis which consists of public broadcasters in the Ibero–America areas, for the purpose of sharing and exchanging information on digital terrestrial TV in the Central American areas. The Forum was held in two days, including panel discussions, workshops and exhibitions. Representatives from MIC, Embassy of Japan in Costa Rica and the JICA Costa Rica Office participated in these workshops to extend their support and cooperation. Some of the scenes of the Forum were covered live by SINART and other local TV broadcasters during the 2–day event. ARIB/DiBEG also extended its support by dispatching and nominating its member company representatives and also through the exhibition, based on a request via MIC for cooperation. 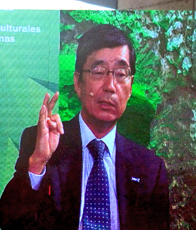 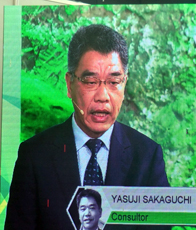 On March 31 the government of Costa Rica, in appreciation of the support and cooperation in the introduction of digital terrestrial TV, awarded a plaque to the representative of the Embassy of Japan in Costa Rica.

At the Workshop sessions, the representative of MICITT made a presentation on the current status of introducing digital terrestrial TV in Costa Rica, explaining that they are intending to materialize ASO (Analog Switch–Off) in December 2017, toward that end they would expand PR activities and also distribute set–top boxes to the low income families.

Each of the Japanese representatives made presentation on the “Current status of digital terrestrial television in Latin America”, ”Experiences of Japan in the ASO”, “TV transmission and measurements”, “EWBS (Emergency Warning Broadcast System)”, ”Transmitting Equipment” and “International Activities of ARIB/DiBEG”.
At each of the sessions there were many questions, mainly in respect to technicalities on ISDB-T, raised to the presenter. 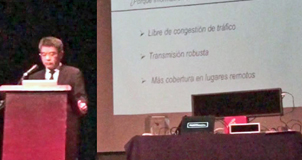 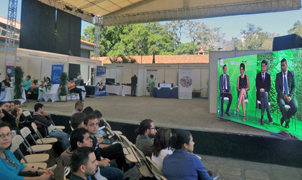 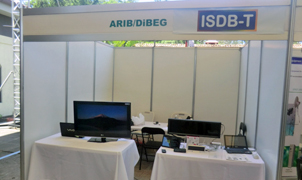