The 2nd Japan–Nicaragua Joint Working Group (JWG) meeting was held in Managua, Nicaragua on March 9, 2017. The Japanese delegation was headed by Mr. Y. Ando, Ambassador of Japan to Nicaragua, with the representatives from Ministry of Internal Affairs and Communications (MIC), ARIB/DiBEG, a JICA expert in Costa Rica, etc. The Nicaraguan side was headed by Mr. Marvin Collado, Subdirector General Instituto Nicaragüense de Telecomunicaciones y Correos (TELCOR), together with the representatives from TELCOR, Ministry of Foreign Affairs and National TV (Channel 6). 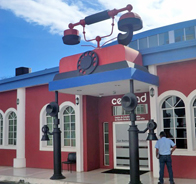 The 2nd JWG meeting was held in Managua, the Nicaraguan capital this time, where the Japanese delegation made detailed explanations on Japan’s field experiences in the transition to digital television, the outline of international activities of ARIB/DiBEG, methodologies to set up nationwide channel planning, etc.

At the meeting Nicaraguan side made reference to the idea of starting up digital terrestrial TV from the level of a small-scale pilot project, and expressed their expectation on Japan in the technical support and cooperation, including the training of human resources for the digital TV implementation. Japan responded they would study necessary support and cooperation to Nicaragua through a JICA expert as a window of communications.