The international Digital TV Forum for Latin America and the Caribbean was held in Cuenca, Ecuador on 4 – 5 December 2008 organized by SUPERTEL and CIEELA.
The delegate from the candidate DTT standards, which is ATSC (USA), DVB-T (Europe), DTMB (China) and of course, ISDB-T (Japan), were invited to present each of their own standards from the points of technology, economy and economic cooperation. …

The forum itself was planned to enhance common understanding for adoption of the unified standard for a digital terrestrial television (DTT) among Latin America and Caribbean countries.  It was targeted to overcome the digital divide and allow universal access to new digital technology.  Representatives from twelve countries participated in the forum.  Most of the countries have not adopted digital terrestrial television (DTT) standards yet.

The delegate from candidate DTT standards, which is ATSC (USA), DVB-T (Europe), DTMB (China) and of course, ISDB-T (Japan), was invited to explain the proposal from the points of technology, economy and economic cooperation.

The representatives of ISDB-T explained not only more technological and economic advantages rather than the other standards but also economic cooperation plans which was offered from Japanese government for the adoption of the standard in Latin America and Caribbean countries.

The indoor demonstration of the ISDB-T with HDTV program and mobile TV services called One-Seg was also performed during the forum.  ISDB-T was the only candidate DTT standard which showed the indoor demonstration, of both transmission and reception (of one HDTV and One-seg in a single 6MHz bandwidth).  The participants from Ecuador as well as the neighboring countries were most impressed with the new technologies of ISDB-T rather than the other standards thanks to the first actual demonstration of DTT transmission and reception in Ecuador.

The following points were agreed upon in the forum;
1. The creation of the regional forum on DTT held regularly
2. The next meeting in Havana on March 2nd and 3rd 2009

More information on the agreed statement of the participants in Cuenca and on the event in general can be found (in Spanish): www.supertel.gob.ec 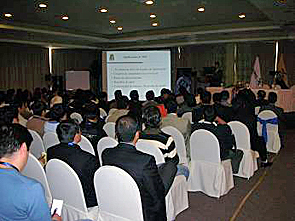 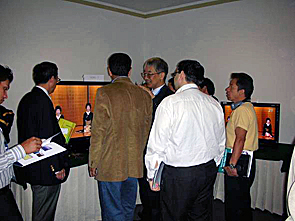 On Tuesday May 20, Minister of Internal Affairs and Communications remarked on the adoption of ISDB-T, the Japanese digi...
2014.05.20

Participation in the Inter BEE 2017

The ISDB-T Broadcasting Technology Seminar was held in Colombo, Sri Lanka on Thursday December 1st, 2016 at the Ramada C...
2016.12.01
Conference for the terrestrial digital TV and the demonstration of the ISDB-T at CAPER 2008 in Argentine
ISDB-T Seminar and Demonstration in Ecuador