The 47th Celebration for World Telecommunication and Information Society Day (WTISD) was held by the ITU Association of Japan (ITU-AJ President:  Mr. Michiaki Ogasawara) at the Keio Plaza Hotel in Tokyo on May 15.

The Encouragement Award:  International Cooperation Field was conferred to DiBEG at this occasion; and Mr. Toshihide Watanabe, Chairman of DiBEG, reverently received the crystal commemorative plaque.

Valuable efforts in international diffusion of Japan-developed terrestrial digital broadcasting technology (ISDB-T) now adopted by 16 foreign countries, including support for developing domestic standard in each country which has newly adopted ISDB-T, thus contributing to advancement of broadcasting in each country. 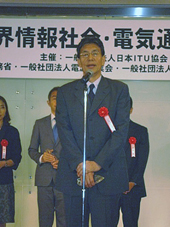 In addition, Mr. Yoshinori Kawana and Mr. Hiroshi Fujita, of both NHK, who contributed to the ISDB-T implementation in Argentina and Venezuela respectively as JICA Experts, received the same Award. 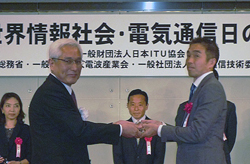 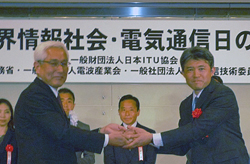 The Government of the Republic of Maldives has decided to adopt the Japanese system (8MHz ISDB-T) as its standard terres...
2011.10.19