DiBEG, together with the Ministry of Internal Affairs and Communications (MIC), organized and held the ”Next-Generation DTTB Technology Workshop” on May 18, 2018 in Tokyo. The Workshop was supported by the Institute of Image Information and Television Engineers.

This workshop was held in order to broadly introduce an overview of the technological development related to the next-generation terrestrial broadcasting from wider perspective. For this purpose, we invited experts as presenters not only from inside Japan but also from Brazil, one of the ISDB-T adopting countries. In the workshop, they offered excellent presentations, including some aspects from global viewpoints.

The Workshop was closed by Mr. Y. Sakanaka, Director, Broadcasting Technology Division of MIC, with his closing remarks.
Reflecting affluent interests in this field, approximately 80 people, which are more than we had expected, participated in the workshop. In the coffee break arranged between presentations, vigorous exchange of information and opinions was held among participants from Japan and Brazil, and strong interests and expectations for future progress of next-generation broadcasting technologies were observed.

Outlines of each of the presenters are as follows;

Mr. Barros introduced the technical elements necessary to materialize the next-generation broadcasting services in Brazil and the future image of the broadcasting compiled by SET. For future television, he stated that it is important to create an environment that can adequately offer high-quality content with various devices to the satisfaction of TV viewers.

Mr. Amaral presented the latest implementation situation of the Analog Switch-Off (ASO) for the complete transition to digital terrestrial broadcasting in Brazil. He explained that the costs of ASO in Brazil would be offset by the revenue of frequency auctions for 4G telecom services; that the achievement rate of 93% of digital TV penetration is the condition of ASO; and that there is a policy of free distribution of STB for low-income families. He also explained in details about the actual situation of ASO implementation in major cities of Brazil.

Mr. Britto presented the latest situation of the Ginga as a broadcast-telecom integrated service and its future applications. He introduced that GINGA-IBB (Integrated Broadcast Broadband) has been developed as an advanced version of the conventional GINGA that can deal with HTML5 applications, and now its specifications are being finalized. This GINGA-IBB features the Ginga Connector API which can accommodate HTML 5 applications, working as a bridge API between the conventional GINGA common core and HTML 5 applications.

Mr. Namikawa presented the latest technology research and development to realize 4K terrestrial broadcasting while continuing 2K broadcasting. According to the solution Mr. Namikawa introduced, by multiplexing the 2K and 4K contents into the horizontal and vertical polarizations, in combined use of ISDB-T hierarchical transmission and MIMO technologies, the 4K broadcasting in parallel with the 2K broadcasting is made possible. A prototype system has now been complete; and they will verify the feasibility in the field trial operations.

Following Mr. Namikawa’s presentation, Mr. Okada introduced the latest results of R&D to materialize 4K terrestrial broadcasting in parallel with 2K. The methodology adopts the LDM (Layered Division Multiplexing) which multiplexes 2 different signals in the level direction. This will enable 4K broadcasting to be multiplexed without substantially modifying the conventional TV viewing environments. He explained that they have completed simulation testing, and that they would build up a prototype for field trials.

Mr. Okano presented the research and development of transmission technology to realize 8K broadcasting on terrestrial television broadcasting. As important elementary technologies, he introduced advanced error correction techniques such as LDPC coding, technologies such as non-uniform constellation (NUC), interleaving, etc. He explained solutions to improve transmission efficiency by combining these technologies while inheriting the features of ISDB-T, and also introduced future plans of verification experiments. 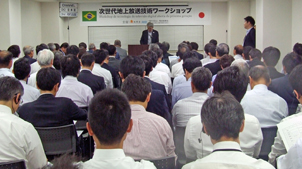 Overview of the Workshop 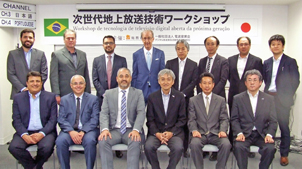 ISDB-T Seminar and Demonstration in Ecuador

The two-day ISDB-T seminar and demonstration was quite successful, attracting more than 200 participants to the seminar ...
2009.01.28

The Technical Harmonization Meeting of the ISDB-T International Forum was held in Sao Paulo on August 30 at the Expo Cen...
2018.08.30