On March 10, 2015, Attorney G. A. Cordova, Commissioner, National Telecommunications Commission (NTC) of the Republic of the Philippines, visited the office of ARIB together with 5 other executive members, including Mr. A. N. Blanco, Chief of Broadcast Services Division.  The NTC mission had a meeting with DiBEG members on the ISDB-T implementation.

Since the Filipino government re-asserted the adoption of the Japanese ISDB-T as its national digital TV standard in November, 2013, DiBEG has been supporting NTC in developing Filipino ISDB-T standards.  During the meeting Commissioner Cordova highly appreciated DiBEG’s support and cooperation so far, and also expressed his expectation of the continuing support in the standardization of the specifications of the receivers, adding an encouraging remark that the Filipino ISDB-T implementation might be a great showcase toward other south-east Asian countries.

Commissioner Cordova, at this occasion, handed a certificate of appreciation to Mr. T. Watanabe, Chairman of DiBEG, expressing his thanks for the support and cooperation extended to NTC by DiBEG. 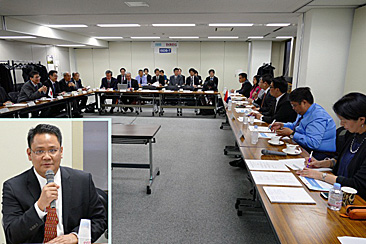 Meeting between DiBEG and NTC Delegation 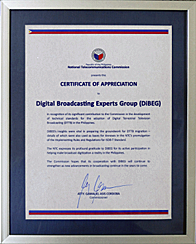 ISDB-T seminar and Demonstration in Colombia