On March 6, 2017 in Guatemala City, Guatemala, there was a seminar to introduce digital terrestrial TV in Guatemala. The seminar was organized by the Superintendencia de Telecomunicaciones (SIT), and DiBEG was requested by Ministry of Internal Affairs and Communications (MIC) of Japan to join and dispatch its representative to the Seminar together with some other presenters from Japan, including Mr. H. Horiwaka, JICA Expert in digital terrestrial TV stationed in Costa Rica but covering Guatemala as one of his contributing countries.

The seminar was started with the welcome speech by Mr. Harold Cancinos, SIT’s operations manager, as the substitution of the Superintendent; and there were approximately 80 people participating, from such as Ministry of Communications, Infrastructure and Housing, National Disaster Prevention Agency, broadcasters, universities, research institutions, consumer groups, media, etc. Main guests included the representatives from the Brazilian Embassy in Guatemala. 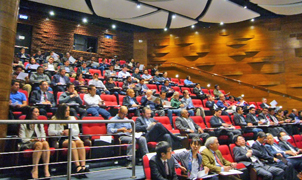 During the Digital Terrestrial TV Seminar in Guatemala City 1

He added that SIT would make good use of SFN (single frequency network) for the efficient utilization of frequency. 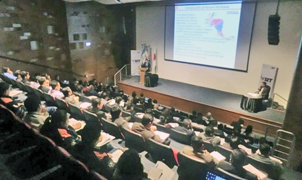 During the Digital Terrestrial TV Seminar in Guatemala City 2

Questions raised by some of the seminar participants included the timing of the launch of digital terrestrial TV, any possibility of distributing STB units to low income people, etc.

The Japanese delegation, including Mr. T. Shibata, Deputy Director of MIC, Mr. H. Horikawa, JICA Expert, etc. made presentations on their experiences in the transition to digital TV, such as frequency re-allocation and PR activities toward the general public, as well as the latest situation of other ISDB-T adopting countries in Latin America on the digital TV implementation.

Representative of both countries at the Seminar

Lecture by the president of Brazilian Society of Television Engineering (SET)