Home
DiBEG News
2013
Conferment of Decorations to Mr. Fernando Bittencourt of TV Globo, Brazil and the special sessions at Inter-BEE 2013

Mr. Fernando Bittencourt, General Director of Engineering at TV Globo of Brazil, got the Order of the Rising Sun, Gold Rays with Neck Ribbon in the 2013 Autumn Conferment of Decorations on Foreign Nationals in Japan. The conferment ceremony was held on November 14th at the Ministry of Internal Affairs and Communications, where the decoration was conferred by the Minister Mr. Shindo.

Mr. Bittencourt performed the comparison tests among the 3 major digital TV standards, substantiated the superiority of the ISDB-T through various evaluations, and contributed to its adoption as the Brazilian standard in 2006. Thereafter, he has been extending support and cooperation to our activities of ISDB-T promotion in South America, thereby greatly contributing to the advancement of the broadcasting technology originally developed in Japan and also to the strengthening of the mutual understanding and cooperation between Japan and Brazil. 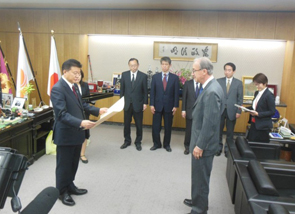 The decoration was conferred by the Minister Mr. Shindo.

We at DiBEG (Digital Broadcasting Experts Group), following the Conferment Ceremony at the Ministry, held a party at the Hotel New Otani to celebrate his conferment. 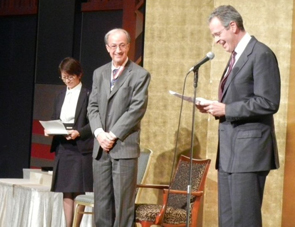 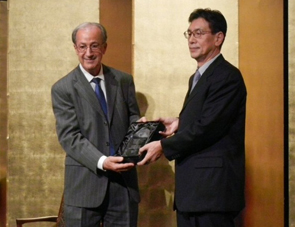 Videos of the Conferment Ceremony and the Celebration Party

There was a special session at Inter-BEE (International Broadcast Equipment Exhibition) on November 15.
Mr. Olimpio Franco, President of SET (Sociedade Brasileira de Engenharia de Televisão) made a presentation on “Current SET moment and future vision for industry”, followed by the presentation by Mr. Bittencourt titled “Digital TV in Brazil: Its Past, Present and Future”. Approximately 100 people earnestly listened to their presentations on this final day of the Inter-BEE.
Mr. Franco firstly explained in details the organization of SET, its missions and various activities; then introduced their on-going experiments on the interference between the TV broadcasting and the LTE cellphone services on the 700MHz band; and concluded with the future vision of the TV industry of Brazil.
Mr. Bittencourt started his presentation with the history of the introduction of digital TV in Brazil; then explained the challenges Brazilian broadcasters are now tackling; and concluded with its future visions toward the 4K and 8K broadcasting. 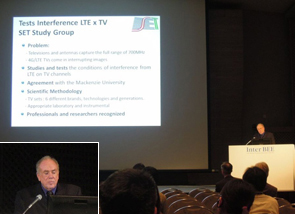 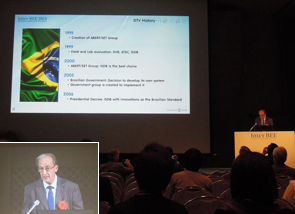 The International Seminar on Digital Terrestrial TV and ICT (Information and Communication Technology) was held on Janua...
2016.01.15
Re-assertion of the Republic of the Philippines to Adopt Japanese-Brazilian System for Digital Terrestrial Television Broadcasting (Ministry of Internal Affairs and Communications Website)
Participation into KBP Annual Convention and Exposition, Philippines