The 39th KBP Annual Convention and Exposition was held on November 14 and 15, 2013 in the suburbs of Manila. There were 11 ARIB/DiBEG member companies participated in the exhibition at the MIC booth, attracting many of the broadcasters all over the Philippines.

The event this time was quite symbolic, following the Filipino government decision to officially adopt ISDB-T on November 5th, while it was rather unfortunate that President Aquino could not attend this, in order to tackle the disasters by the typhoon Yolanda which hit the Leyte area only a few days before this event. Mr. Franklin Drilon, Senate President, read the message on behalf of the President, pointing out that ISDB-T contributed to the life-saving in Japan during the Great East-Japan Earthquake by emanating Tsunami Warning Signal, by alerting the electrically black-out area residents via One-seg, and expressed his desire that ISDB-T would bring such benefits also to the Filipino people in such emergency situations. 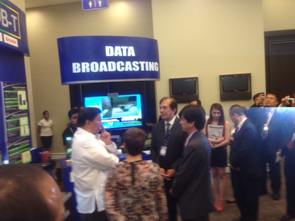 DiBEG submitted Comments on the CPqD Integration Report to Brazilian ANATEL in June, 2001. Though the comments and th...
2001.06.01

February 10th 2009 Benefits without limits in a single technology: ISDB-T The Standard of Terrestrial Digital Televis...
2009.02.10
Conferment of Decorations to Mr. Fernando Bittencourt of TV Globo, Brazil and the special sessions at Inter-BEE 2013
Engineering Seminar on ISDB-T Standards in Philippines