The Technical Harmonization Meeting of the ISDB-T International Forum, intended for the smooth implementation and permeation of digital terrestrial television by each of those ISBD-T adopting countries, was held in Sao Paulo on August 19 at the occasion of SET 2013. Representatives from 5 member countries, namely Japan, Brazil, Uruguay, Chile and Venezuela, participated in the meeting. The Japanese delegation was headed by Mr. M. Shiozaki, Director for Digital Broadcasting Technology Division of Ministry of Internal Affairs and Communications (MIC), and included Mr. M. Takechi, Mr. H. Sanei and Mr. Y. Kawana from NHK, 4 JICA Experts for ISDB-T implementation in 4 countries (Costa Rica, Peru, Ecuador and Uruguay), and Mr. M. Fujimoto from ARIB/DiBEG Secretariat.

Mr. T. Yoshimi, JICA Expert in Costa Rica and Chair of EWBS-Working Group, started the meeting with the report on the EWBS (Emergency Warning Broadcast System) Harmonization Document which was approved by the ISDB-T International Forum members in May, 2013.

There was a discussion on the Middleware Harmonization Document in relation to datacasting which had been carried over at the Uruguay Meeting; and it was reported that there are 4 countries including Japan who made revision proposals. Mr. M. Takechi who is a rapporteur of ITU-R SG6 and IBB (Integrated Broadband Broadcast) of ITU-T SG9, reported the international standardization procedures up to now together with their relations with regional standards, as well as the orientation of the activities from now onward. The members agreed to continue to exchange views and opinions through email communications, targeting to the final approval of the Harmonization Document at the ISDB-T International Forum meeting in Venezuela scheduled in March, 2014. 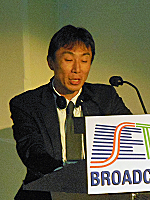 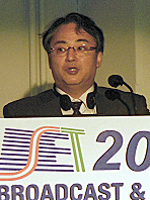 The last subject to discuss was on the ISDB-T standard for those ISDB-T adopting countries with 8MHz bandwidth for terrestrial broadcasting, as Botswana became the first country in Africa to adopt ISDB-T in February this year. Mr. H. Sanei of NHK, who is the chairman of the DiBEG Task Force to study ISDB-T standard for those countries with 8MHz bandwidth, made a detailed report. Also, as Japan explained that they are ready to make a revision proposal to the Hardware Harmonization Document in a way that the Document would incorporate the standard for 8MHz, other participating country representatives agreed. The DiBEG Task Force will continue its study on the revision proposal, which would be proposed to the Hardware Working Group, to be approved by the ISDB-T International Forum Meeting in March next year. 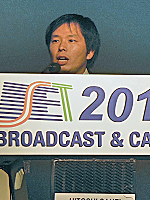 The SET 2013, organized by SET (Sociedade Brasileira de Engenharia de Televisao) and held in August every year with panelist-type forum and exhibition on broadcasting technologies, was held from August 19th through 22nd in Sao Paulo. At the exhibition area, total 9 DiBEG member companies and their Brazilian affiliates exhibited each of their products and systems, contributing to the success of the event as in the past.

At the forum, Mr. M. Shiozaki (on international promotion of ISBD-T), Mr. H. Sanei (on the ISDB-T standard for 8MHz bandwidth), Mr. Y. Kawana (on Analog Switch-Off), Mr. Y. Shishikui of NHK (on “Super Hivision”), Mr. M. Takechi (on Hybridcast), Mr. K. Hirose of JICA Expert in Peru (on EWBS and Ginga projects in Peru) and Mr. M. Fujimoto (on the current status of standardization in broadcasting) made presentations respectively together with other panelists from Brazil and other countries, each followed by active Q&A sessions. The forum included various sessions attracting strong attention of the participants, including the discussion between Mr. G. Smith of NAB President and CEO and Mr. F. Bittencourt of TV Globo.

On September 20, 2011, the document "Data Coding and transmission specification for digital broadcasting" has been revis...
2011.09.20