The Technical Harmonization Meeting was held in Sao Paulo on August 21 at the Expo Center Norte among the members of ISDB-T International Forum, in parallel with the SET EXPO 2017, to discuss ISDB-T implementation. 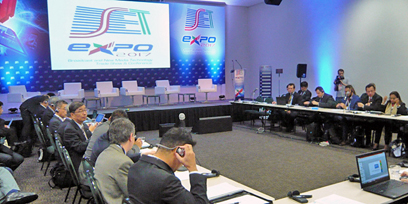 At the Hardware Technical Harmonization Document session, in respect to the list of receiver parameters describing the situation of each of the ISDB-T adopting countries, there was a proposal made to add newly adopting country names, together with the information offered by Japan and other countries; which was approved during the session.

At the Middleware Technical Harmonization Document session, the Brazilian representative explained the situation of Ginga and the details of ABNT NBR15606 related to Ginga.

In regards to the locution functionality, Brazil made a comment that they have completed a report on the study of functions that hearing impaired people can make commands with their hands and fingers, and that they are willing to offer such information and also to exchange views and opinions with any country interested in this functionality.

Attendees of the Technical Harmonization Meeting

On September 20, 2011, the document "Data Coding and transmission specification for digital broadcasting" has been revis...
2011.09.20

Chile decided the adoption of ISDB-T in September, 2009 as its national standard of digital terrestrial television; and ...
2019.01.17
SET EXPO 2017 in Brazil
The 4th Regular Meeting between ARIB/DiBEG and SBTVD Forum Held in Sao Paulo