The 6th Japan–Botswana Joint Working Group Meeting was held in Gaborone, Botswana on April 26, 2017 at the headquarters of Department of Broadcasting Services (DBS).

In February 2013 Botswana decided to adopt ISDB-T as its national digital terrestrial television standard, the first country in the African region. For the purpose of technical assistance and cooperation for the introduction of ISDB-T into Botswana, the two governments have had regular joint working group meetings.

At the meeting the Botswanan side explained its future planning on digital TV broadcasting; now that the nationwide terrestrial digital TV network almost complete, the next mission would be to tackle ASO (Analog Switch–Off) to execute from January, 2018 onward, after some trial ASO in a limited region. Also they explained that some of the Botswanan domestic manufacturers are starting their preparations for the manufacture of STB products, and that they solicited public entries for new licensing to private broadcasters.

The Japanese delegation introduced their experiences in the PR activities toward the general public before the ASO execution in Japan, and also explained the current implementation status of the next generation broadcasting services such as 4K/8K broadcasting and the Hybridcast which is the Integrated Broadcast-Broadband service in Japan. During the meeting they also performed a demonstration of the EWBS (Emergency Warning Broadcast System) by using ISDB-T receiver products; and proposed to the Botswanan side that a pilot project of EWBS functionality would better be included in the trial of the ASO in Botswana. 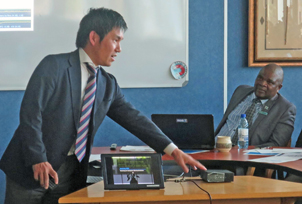 EWBS Demonstration during the JWG Meeting

The next Joint Working Group meeting would be held in Japan, duly in consideration of the time frame of the trial of ASO in Botswana.

On November 3-4, 2010, an exhibition of the benefits and features of ISDB-T was held in Pretoria, Republic of South Afri...
2010.11.03
Central American Digital TV Forum Held in Costa Rica
3rd Meeting with Brazilian SBTVD Forum