The 3rd regular meeting between ARIB/DiBEG and the SBTVD Forum was held on April 26, 2017 at the Las Vegas Convention Center.

The Brazilian side consisted of total 8 members; Mr. José Marcelo do Amaral, President, SBTVD Forum, Mr. Roberto Franco, member of SBTVD Board of Directors, and 4 other representatives from SBTVD Forum, Ms. Liliana Nakonechnyj, President, Sociedade Brasileira de Engenharia de Televisão (SET), and Mr. Olímpio José Franco, General Superintendent of SET.
The Japanese side was comprised of Dr. M. Sugawara, Chairman of DiBEG, Mr. K. Murayama, Chairman of Task Force for Next Generation Broadcasting System, and Mr. Y. Homma, Vice Director General, R&D Headquarters, ARIB.
ARIB/DiBEG and SBTVD Forum have been continuing regular meetings almost once every 6 months, to strengthen mutual ties for the promotion of ISDB-T.
This time, at the occasion of the NAB Show 2017 held in Las Vegas, Nevada, USA, both parties got together there to hold the 3rd regular meeting. 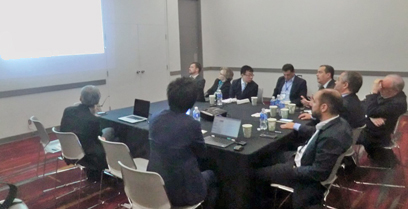 At the start of the meeting, Mr. J. Marcelo, newly elected President, introduced himself to the participants; followed by the exchange of the latest information on the activities of each of the organizations.
Japan also explained its recent activities of support and cooperation toward those ISDB-T adopting countries including El Salvador, as well as the latest development status of the 4K/8K broadcasting, etc. On the other hand Brazil explained the situation of Analog Switch-Off execution in Sao Paulo, the largest city of Brazil, in March this year, and also explained the latest status of the study of next generation broadcasting services in Brazil.

Then both parties worked together to update the joint document compiling the differences between the Japanese and Brazilian ISDB-T standards; and it was mutually confirmed that Brazil would make revision proposal to the Japan’s proposal of revision, and that the joint works would continue further on.

Both parties also exchanged information and opinions on the promotion of EWBS (Emergency Warning Broadcast System) toward the Latin American region, and also agreed to start the joint study on the possibility of harmonization in the coordination of Integrated Broadcast-Broadband Services between Ginga of Brazil and Hybridcast of Japan.

They both agreed to have the next meeting at the occasion of the SET EXPO 2017 in Sao Paulo in August this year.

ARIB/DiBEG Participated in the Inter BEE 2018