A digital terrestrial TV seminar was held at a conference hall of the Agencia de Regulación y Control de las Telecomunicaciones (ARCOTEL) in Quito, Ecuador, on November 9, 2015.  Ecuador decided to adopt the Japanese digital terrestrial TV standard (ISDB-T) and started its broadcasting service in 2010.  And in November, 2012, Japan dispatched Mr. Hisao Nakakita as an Expert of JICA (Japan International Cooperation Agency) to Ecuador to extend its support and cooperation in the smooth ISDB-T implementation.  This time, as the assignment for Mr. H. Nakakita is to be complete in November, a seminar was set up to successfully conclude his mission.  Approximately 30 people attended this seminar, from ARCOTEL, MINTEL (Ministerio de Telecomunicaciones y de la Sociedad de la Información), broadcasters and some other entities.  From the Japanese side, representatives from the Embassy of Japan in Ecuador, JICA Ecuador Office, Ministry of Internal Affairs and Communications (MIC) and ARIB/DiBEG participated in this seminar as presenters.

Mr. H. Nakakita started the seminar presentations, including the latest situation and challenges of digital terrestrial TV in Ecuador.  He explained that careful consideration is required for the timing of ASO (Analog Switch-Off) in the populous Quito region even though half of the entire population is already covered by the digital terrestrial TV services, and that an overnight switch-over from analog to digital TV might also be one of the solutions to study toward the ASO due to the fact that Ecuador is short of the frequency resources to be utilized during the transition from analog to digital.

The MIC representative presented its experience in the ASO in Japan, its current tackling of 4K/8K broadcasting, etc., while the representative of ARIB/DiBEG explained the standards and international promotional activities on ISDB-T, etc.

The Ecuadorian side expressed its high appreciation of the activities and contribution by Mr. H. Nakakita as JICA Expert, and also confirmed its willingness to maintain bilateral relations toward further nationwide promotion of ISDB-T in Ecuador. 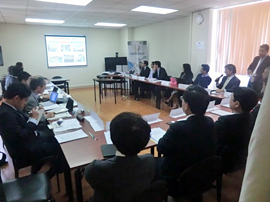 Photos taken during the seminar 1 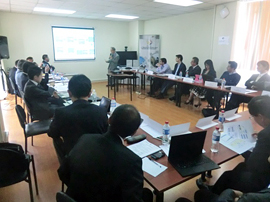 Photos taken during the seminar 2

DiBEG has been extending its support to the ISDB-T adopting countries for developing their own ISDB-T standards.
2015.04.30
SET EXPO 2015 in Brazil
Joint Working Group Meeting Held in Nicaragua