At the exhibition, Ministry of Internal Affairs and Communications (MIC) of Japan arranged a Japan booth. In the Japan booth, DiBEG demonstrated some comfortable One-Seg receivers and Emergency Warning Broadcasting System (EWBS) while presenting ARIB/DiBEG activities by a leaflet. EWBS was demonstrated also in the SBTVD Forum booth by the invitation of the EBC – a public TV broadcaster in Brazil.

Also, at the conference, in the session titled as “ISDB-T: Current and Future Visions” chaired by Mr. Olimpio Franco, President of SET, (1) International Promotion of ISDB-T, (2) Recent Activities of ARIB/DiBEG, (3) EWBS project in Peru, were presented by Ms. Kondo of MIC, Mr. Fujimoto of ARIB, and Mr. Hirose of JICA expert dispatched to Peru respectively and discussed with many audience.

According to the official announcement, 300 exhibitors and 17,484 participants attended the exhibition and conference. 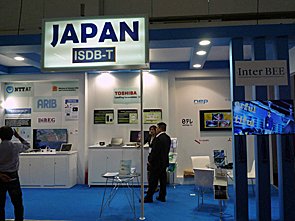 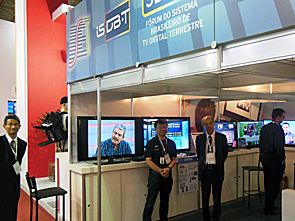 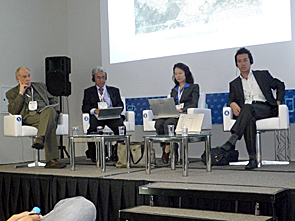 The Plurinational State of Bolivia decided to adopt ISDB-T as its national terrestrial TV standard in July, 2010, and st...
2019.05.14

The Japanese delegation, comprising of the representatives from the Ministry of Internal Affairs and Communications, ARI...
2013.08.01

On Tuesday, June 1, 2010, in the consideration of the recommendation of the National Telecommunications Commission (Cona...
2010.06.02
May 20, 2014 Sri Lanka’s Decision to adopt ISDB-T
Seminar on ISDB-T International Activities in Uruguay