The first ISDB-T Seminar in Maldives was held on Bandos Island on Sunday March 13, 2016, jointly organized by the Maldivian Ministry of Home Affairs and the Japanese Ministry of Internal Affairs and Communications (MIC).  The Republic of Maldives decided to adopt ISDB-T as its digital terrestrial television standard in April, 2014; and has been progressing toward its nationwide broadcasting with the help and cooperation by Japan in such areas as channel planning.  DiBEG has also been extending its technical support and assistance to Maldives in documenting the Maldivian domestic ISDB-T standard.  This time, with the study and analysis of ISDB-T implementation much accumulated, the ISDB-T seminar was organized by the bilateral governments, targeting the government people, broadcasters and those people related to digital television in Maldives, to introduce them the technologies and experiences of ISDB-T in Japan; and DiBEG contributed to this occasion by dispatching its presenters of various aspects of ISDB-T as well as extending its support for the seminar preparation works.

At the opening of the seminar, Dr. R. Kondo, Director for Digital Broadcasting Technology of MIC and Hon. Umar Naseer, Minister of Home Affairs, representing Japan and Maldives respectively, made a welcome speech to the seminar participants.  They both expressed their desire to further solidify the bilateral relationships with this seminar as a momentum. 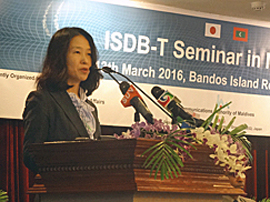 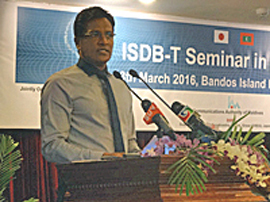 Then the experts from DiBEG followed with their presentation, introducing various themes and subjects such as the outline of ISDB-T, transmission and multiplexing technology, studio equipment, receiver products, datacasting and area-specified service, EWBS (Emergency Warning Broadcast System), experiences of Japanese broadcasters, etc.
In addition, a representative of the JICA Study Team showed the latest status of the Maldivian nationwide frequency planning study to which JICA has been giving its assistance and cooperation.  And Mr. T. Sato, Deputy Director of Broadcasting Technology Division of MIC, introduced Japan’s experience in the analog switch-off at the final stage of migration to digital terrestrial TV broadcasting.

Strong interests were shared among the participants in the channel planning; and there was a Q&A in respect to the conditions of frequency interference included in the study.
In the seminar hall, there was a demonstration corner provided for the reception of the digital TV signal from PSM (Public Service Media) by way of various ISDB-T receivers such as for the fixed reception, mobile reception and for reception via set-top box.  Many of the seminar participants showed strong interests in these receivers during the intervals.

Inside the Seminar Hall on Bandos Island 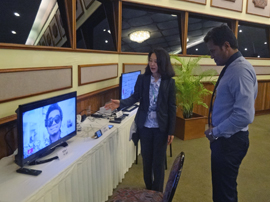 Hon. Nasser having a look at demo of ISDB-T reception 1 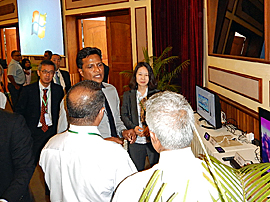 Hon. Nasser having a look at demo of ISDB-T reception 2

This ISDB-T seminar attracted more than 80 people, from governmental organizations such as the Ministry of Home Affairs, Communications Authority of Maldives, Maldivian Broadcasting Commission, Coast Guard, Maldives Police Service, etc., and also from Public Service Media and several private broadcasters.  After the seminar, many of the participants expressed their high appreciation of the seminar, as well as their strong expectation of closer bilateral cooperation for the ISDB-T implementation. 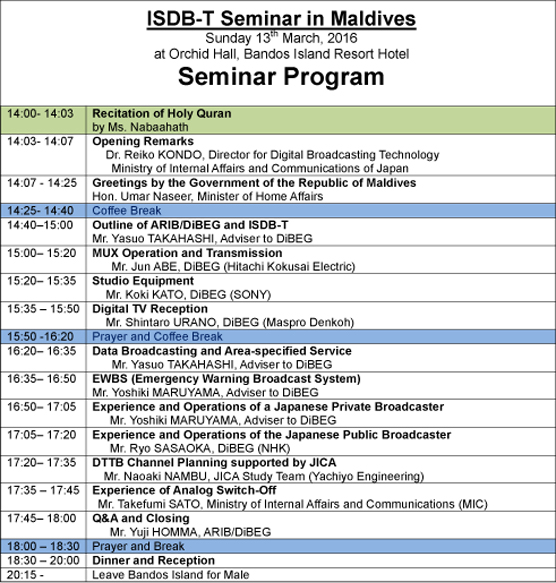 On April 28 and 29 there was the captioned seminar held in Quito, Ecuador hosted by the Ministry of Internal Affairs and...
2014.04.28