The InterBEE (International Broadcast Equipment and Exhibition) 2014 was held from November 19 through 21st at the Makuhari Messe in Japan, where ARIB/DiBEG participated in the exhibition for the first time for promotional activities.

This year the InterBEE celebrated its 50th anniversary, with the largest number of exhibitors and visitors in its history.

At the ARIB/DiBEG booth we introduced the recent standardization activities in the field of broadcasting, together with the international promotion of the ISDB-T concept, with some panels and pamphlets.

The ARIB/DiBEG booth was conveniently located in the area of Global Partners such as NAB (US), IBC (Europe), SET (Brazil), etc.  Because the Brazilian SET booth was situated right in front, we could smoothly collaborate for the DiBEG activity promotions.

On Friday 21st Mr. Olimpio Franco, President of SET, made a lecture as one of the honorable speakers for InterBEE, focusing on the latest implementation of digital terrestrial television in South America, including Brazil. 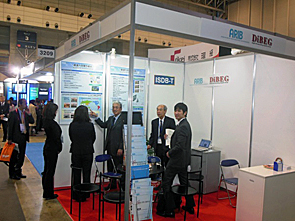 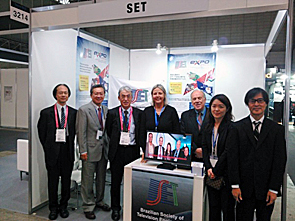 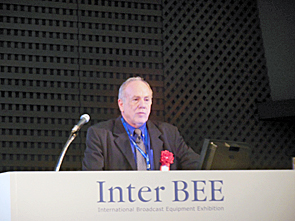 Mr. Olimpio Franco, President of SET at the podium

Literatures handed out at the Booth
(Japanese)

Literatures handed out at the Booth
(English)

Bolivian government hosted the seminar and the demonstration for the terrestrial digital TV from Wednesday, 29th July th...
2009.07.29