July 12-13, 2010, the National Telecommunications of Thailand hosted a Digital Television seminar which was participated by the local broadcasters and concerned industries. In this activity, several sessions were assigned for the explanation of the ISDB-T technology to clarify the misconceptions and misunderstanding about the true merits of the technology.

Just outside the session hall, a live demonstration of the capabilities of ISDB-T was installed that gained a lot of attention and great impression from the participants. 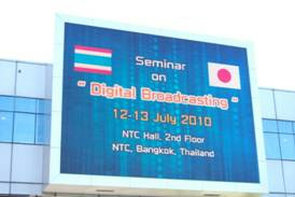 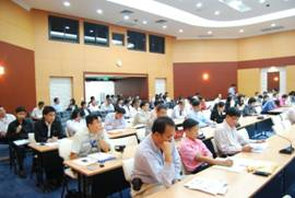 In the demonstration set-up, four HD displays were used to highlight the superb quality of HD programs, it also showed the comparison between an HD and SD program. Aside from the flat panel displays, one CRT and a small TV with an integrated ISDBT-T receiver was installed to show that even old and small TV receivers can still be used in Digital TV.

One of the most attention grabbing part of the demonstration is the mobile/handheld one-seg receivers, it was a showcase of the variety of receivers available for ISDB-T. 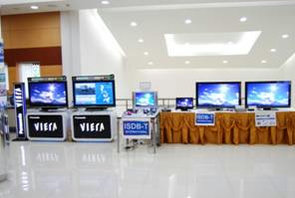 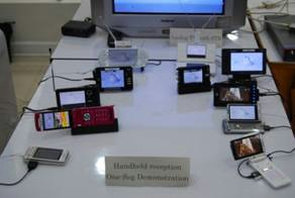 The major features that really struck great interest among the participants are HD quality, Mobile TV, frequency efficiency, databroadcasting and Emergency Warning Broadcast feature. Several participants realized that this EWBS feature will significantly address the need of Thailand for an efficient means to deliver Emergency Warning Signal to the people.

At the end of the seminar and demonstration, a live comparative testing between ISDB-T and DVB-T will be held to gather realworld data and see which is the real technically superior Digital TV standard.

The SET EXPO 2017, the largest conference and exhibition in Latin American broadcasting, was held by SET (Sociedade Bras...
2017.08.21

The governments of Japan and the Philippines have been holding a series of Japan-Philippines Joint Working Group (JWG) m...
2017.09.23

On May 28, 2013, the ISDB-T International Forum approved the technical harmonization document on EWBS (Emergency Warning...
2013.05.29

The 39th KBP Annual Convention and Exposition was held on November 14 and 15, 2013 in the suburbs of Manila. There were ...
2013.11.14
Bolivia adopt ISDB-T as the standard of the digital terrestrial TV.
ISDB-T Demonstration in Pretoria, Republic of South Africa for SADC Countries